In this project, schools have been asked to send a photograph of their school together with the top 5 words or phrases which their pupils reckon overseas visitors to their school should be able to say and understand.

The children’s photos and language phrase book will be published here :

From the Canary Islands

These are the links to our school (www.colegioalbolafia.com) in Google Maps and What3words app. 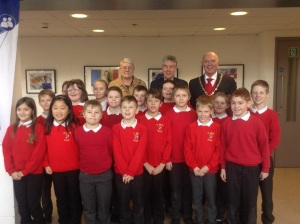 The exhibition has proven to be very popular and has had its run extended.

A special quiz for children has been developed to complement the exhibition. Click the link above for the questions. The solution can be found here quiz answers 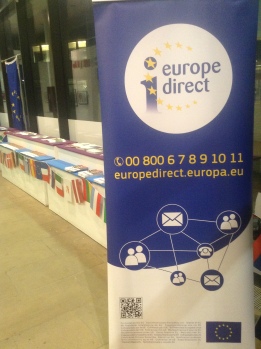 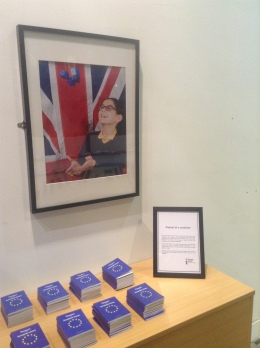 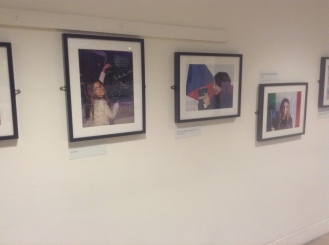 The European Coal and Steel Community was first proposed by French foreign minister Robert Schuman on 9 May 1950 as a way to prevent further war between France and Germany. He declared his aim was to “make war not only unthinkable but materially impossible.”

In 2012, the Nobel Peace Prize was awarded to the European Union “for over six decades [having] contributed to the advancement of peace and reconciliation, democracy and human rights in Europe.”

In 2015, at a time of war, terrorist attack and instability, young people from across the European Union chose to express their own personal wishes for their future in their continent.

For the sake of us, children, I hope Europe preserves the peace on our continent and in the world.

I hope that there won’t be any wars and no refugees in future. I hope Europe will be a happy place where we will  have all equal chances. I hope i will become a film director and my films will be shown in all European countries.

My hope is for lots of robots in Europe, I like robots. I would like to see Holland, London and Paris. I would love to fly all over Europe, but I fly, not in a plane. My mum wants a Europe that is closer and stronger together.

To all children in Europe Tobiáš wishes a happy childhood spent surrounded by people who love them and a satisfied life when they grow up.

I hope for my future that the countries of Europe will continue to help each other. I also hope that for times to come there will remain a diversity among the different countries that each country can experience and learn from.

When I grow up I would like to live together with my friends. My residence place would be Estonia but I would like to travel to other European countries. For example I dream to visit England. I’ve got friends there with whome I communicate via xbox. I want to become an electrician who can repair computers. In spare time I like to communicate with my friends via xbox and computer.

I would like to travel around Europe. For example, it would be nice to visit Germany again.

I would like Europe in 2050 to have less pollution and for there to be no more terrorist attacks.

My wish for Europe is for people to become greener and make the world a better place for every living thing. I wish that all young people grow up to be free thinkers that are happy, loyal and kind.

I’m 12 and my name is Allegra, which means happy and cheerful in Italian. I would like the meaning of my name to be shared by everyone  all over the world. No more hunger, no more violence : I hope Europe will lead the way to a better and happier world.

I would like to always be able to go where I want in Europe to visit my family and friends in Luxembourg, Ireland and Spain. I like having friends from different nationalities. I don’t know what I want to become when I am older but I like to think I can go anywhere I like.

I dream of growing up in a united Europe that celebrates diversity and embraces the values of love, peace and respect.

Because of Europe we live in peace and as long as we stick together, we’ll stay in peace. Working together is important, because you can help each other. I like it too when my friends help me, when I’m in trouble!

Many nations but one goal ; a full life in peace and tranquillity in the EU.

Children of Europe – you are the key to the future. You are the next generation and you should be determined to shape the world and inspire those around you. The world would not be the same if you were not part of it. Follow your dreams and never give up on yourself. Dream. Believe. Achieve.

My dream is a better Europe for people, animals and the environment.

I hope that European countries work together, that they show greater unity and that they manage to solve their current problems. I wish all young Europeans a great future.

Europe means to me – I can go everywhere and we are open to all friends as well.

I want peace in the world.